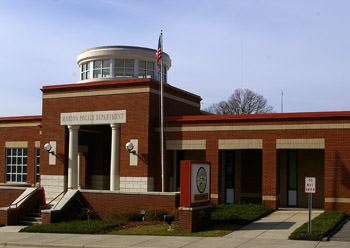 The Police Department is committed to enhancing the quality of life for the citizens of Marion through proactive enforcement, patrol, and investigations within the City Limits.

The Department has 26 full-time sworn positions, one full¬time civilian position, and eight reserve positions. The Department maintains Administrative, Patrol, and Investigative divisions. The department also maintains a Special Response Team (SRT) for high-risk situations. Allen Lawrence serves as the Police Chief for the City of Marion.

Community policing and crime prevention are stressed through Neighborhood and Business Watch Programs, business visits, and events such as National Night Out. The Department is involved in the schools by maintaining two School Resource Officers. One officer is assigned to East McDowell Middle School while the other splits time between Marion Elementary School and Eastfield Global Magnet School. The Department provides property checks for residents and business checks for businesses in the City Limits.